Rates as of 05:00 GMT
Note: The USD and CAD indices are not updating.

(Note: I’m having problems gauging exactly what’s happening in the market as Deutsche Bank’s USD and CAD trade-weighted indices aren’t updating. I use those because they’re the only series that I can get that are built in a consistent way across currencies, but I’m at the mercy of some programmer in DB as a result. I prefer to judge whether a currency is “up” or “down” by using a TWI rather than just gauging it against the dollar, although probably its movement vs the dollar matters more for traders. That’s why I also include the table at the bottom. In any event the two changes are usually pretty close, since in most cases the USD is the largest component of the TWI anyway.)

A mixed day for risk as stock markets were off slightly from Monday’s record highs ahead of today’s Federal Open Market Committee (FOMC) meeting (see below). Commodities however powered ahead, with copper and oil both gaining further.

The big action was in bond markets, particularly US Treasuries, thanks to yesterday’s auction of $62bn in 7-year notes. The auction went OK (I’ll spare you the details) but bond prices continued falling afterward anyway. Ten-year Treasury yields rose 5.5 bps to 1.62%. Rising commodity prices may be pushing inflation expectations up – the ten-year breakeven inflation rate rose 3 bps to 2.39%, the highest level since April 2013. Yields were also higher in Europe, although not by anywhere near as much. 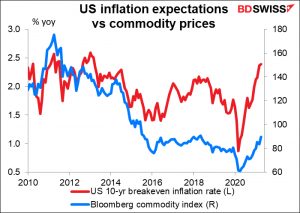 JPY was the biggest mover of the day. It looks to be just end-month positions-squaring as USD/JPY had been on a falling trend but reversed. The Bank of Japan meeting, which lowered the inflation forecast and thereby eliminated the 0.01% chance that the BoJ might ever normalize policy, might have been a cause, but it went exactly as people had expected so I doubt if it made anyone rethink their positions. Probably people are just squaring up and taking care of business ahead of the Golden Week holiday, which starts tomorrow with the exciting Showa Day and continues next Monday, Tuesday and Wednesday.

AUD also fell – there we finally have an endogenous story! Australia’s consumer price index (CPI) rose less than expected: it was up 0.6% qoq vs 0.9% qoq expected, with the annual rate of increase rising to 1.1% from 0.9% vs 1.4% expected. 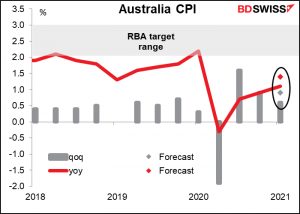 Even worse, the two core inflation measures – trimmed mean and weighted median – actually fell: trimmed mean 1.1% yoy down from 1.2% yoy, weighted median 1.3% yoy down from 1.4% yoy. While these measures aren’t the specific target of monetary policy, the Reserve Bank of Australia (RBA) does use them to gauge underlying inflationary pressures, as described in a paper by the RBA, Measures of Underlying Inflation:

In Australia the inflation target is expressed in terms of the average rate of increase in the consumer price index (CPI). In particular, the objective is to ensure that the rate of increase in the CPI averages between 2 and 3 per cent over the medium term. In assessing current inflation pressures and the outlook for CPI inflation, the Reserve Bank makes use of a wide range of measures of ‘underlying’ inflation which attempt to abstract from the short-term volatility in some prices. 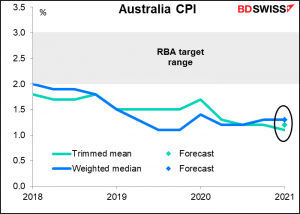 Although Australia is doing really well on the employment front – the number of people in jobs has now surpassed the number employed before the pandemic began — this development pushes back the chance for any normalization of policy. Accordingly, it’s negative for AUD 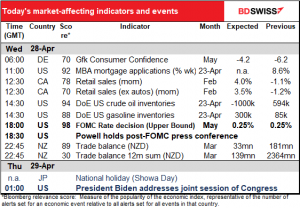 Two big events today, which I’ll deal with first before going through the calendar. As usual, I dealt with both of them in mind-numbing detail in my Weekly Outlook, which you’re welcome to refer back to you if you missed having your mind numbed the first time around.

The meeting of the US Fed’s rate-setting Federal Open Market Committee (FOMC) on Wednesday will probably just see a change in tone, if that. There has been significant economic progress in the US recently, which is likely to be reflected in the statement following the meeting and in Fed Chair Powell’s press conference afterward. However, I can’t see the Fed even starting to talk about changing direction yet. Although the CPI hit their target recently, they want to see it over 2% “for some time.” They’ve already said they think this rise is just temporary. Furthermore, they seem to be more concerned with the employment side of their dual mandate rather than inflation, and there’s still a long long way to go with that.

The main question then will probably be how they are doing relative to how they expected to be doing at this point when they upgraded their forecasts in last month’s Summary of Economic Projections. Chair Powell will probably be more optimistic in the press conference – I’m sure he’ll be pressed on the question of whether the US economy has reached or even passed the “inflection point” that he mentioned recently – but as long as most Americans aren’t vaccinated and the pandemic is still a risk, I wouldn’t expect him to change his tune dramatically. The impact from a more upbeat assessment though might be to boost stocks. The “risk-on” environment would then be negative for the dollar.

EUR/USD has been relatively active during three of the last four FOMC meetings even though they didn’t make any changes in their policy. Last month though included the quarterly Summary of Economic Projections (SEP), which is always significant in diving what the Committee’s intentions might be. There won’t be a SEP to get people excited this time. So, it just depends on what Powell has to say, largely. 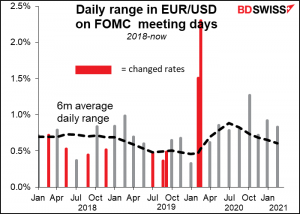 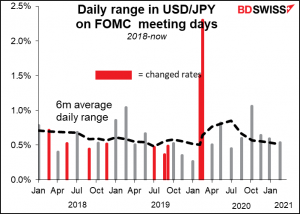 The other big event is that US President Biden will give a speech Wednesday night to a joint session of Congress. This is usually called the “State of the Union” speech, except not in the president’s first year, so this is not being called the “State of the Union” speech. But it is. Biden will probably boast about his achievements with the vaccine and explain his hopes & dreams for upcoming legislation, such as the American Families Plan and the American Jobs Plan (the $2tn infrastructure plan).

The part that has everyone in a tizzy is President Biden’s intention to raise taxes on capital gains to be equal to that on income for people making $1mn a year, which narrowly excludes me, fortunately. That was the case in the late 1970s and I don’t remember the US sinking under the waves then, although things could be different now – many of the 5,439 people who give more than $100,000 a year to US political campaigns will probably be among the 0.3% of the population affected and will probably squeal and squirm.

Those are the big events of the day. Now back to the calendar.

Today’s ministerial meeting of OPEC was dropped. OPEC is the group consisting of the OPEC countries plus a few others that have agreed to coordinate their oil policies with the cartel, notably Russia. After yesterday’s market monitoring committee recommended that they stick to the course that the group agreed on April 1st, they decided there was no need for a meeting. The next meeting will be June 1st.

Canadian retail sales are expected to show a good bounce after two months of decline. In fact it’s expected to be a record rise, excluding the two recovery months of last year. (The 2nd highest was 3.3% mom in March 1994, which was followed the next month by a record 3.2% mom drop, the biggest drop ever before last year. So, I suspect there was some tax change in April 1994 that brought spending forward a month then.)

The main driver of activity in February was the lifting of lockdown restrictions during the month, which allowed more people to spend, spend, spend! As usual. Auto sales were also solid, although those don’t affect the ex-autos figure that the FX market pays most attention to. 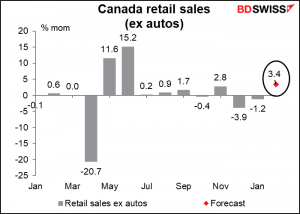 Overnight, New Zealand announces its trade data. The figures aren’t seasonally adjusted, so I prefer to look at the 12-month moving average. It peaked in November and has been coming down steadily ever since. 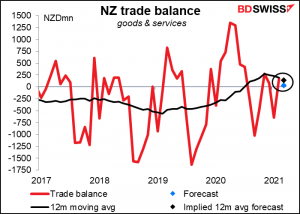 Exports are rising, but imports are too at about the same pace. 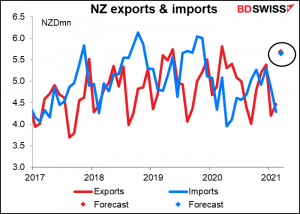 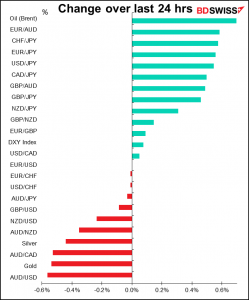