Better-than-expected preliminary purchasing managers’ indices (PMIs) on Friday drove a “risk-on” mood that lifted US stocks, the commodity currencies and the euro while depressing USD and the other two safe-haven currencies, JPY and CHF. 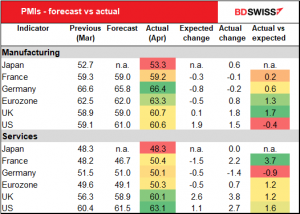 Only US manufacturing and German services missed expectations, the others all beat expectations, in some cases substantially. Of particular note – the Eurozone service-sector PMI moved back above the 50 line and the Japan composite PMI (not shown in table) moved back above 50 for the first time since January 2020, i.e. even before the pandemic hit. 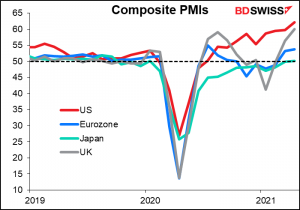 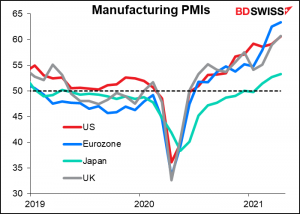 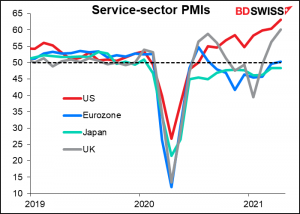 The huge beat by the French service-sector PMI, which came despite a national lockdown, was particularly encouraging to the FX market and helped to support EUR, along with overall better-than-expected EU data. Oddly enough though it didn’t support EU stocks, which fell slightly on the day (Euro Stoxx 50 -0.04%, DAX -0.27%, CAD 40 -0.15%) although US stocks gained (S&P 500 1.09%, NASDAQ 1.44%).

There was also a report on Bloomberg that European Central Bank (ECB) officials expect a heated debate at the June 10th ECB meeting on whether to start slowing bond purchases by the Pandemic Emergency Purchase Programme (PEPP) to keep it within its planned EUR 1.85tn limit. According to the report, some members think the Eurozone economy will be recovering strongly in Q3 and so they should start scaling back the purchases, while others want don’t want to commit to staying within the planned amount but rather want to keep the option to expand it if necessary. Scaling back the purchases = tightening monetary policy = a stronger EUR.

I expect that the US indicators this week will also be relatively strong, which may elicit the same sort of response: US stocks higher, USD lower.

The strong EUR dampened GBP despite the strong beats by the UK PMIs. Note that UK retail sales, out at the same time, also rose more than expected even before non-essential stores open. The inability of GBP to rally against the background of this good news suggests that much of the good news for the UK is already priced in.

One key point not shown in these graphs is that the PMIs showed input cost pressures are rising, which is likely to push inflation rates higher later on in the year.

The surging caseload in India is causing a lot of alarm. No one can think “well, we’re mostly vaccinated so we’ll be OK” while there’s something like this going on. It’s like saying “we’re bailing out our end of the boat, so we won’t sink.” Some models are predicting that India could see 500k new cases a day by the end of the week. So many new cases create more opportunities for the virus to mutate and endanger everyone. 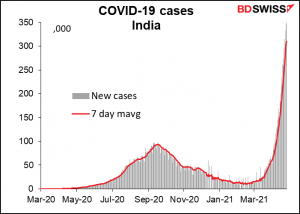 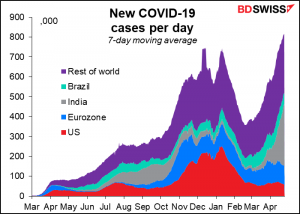 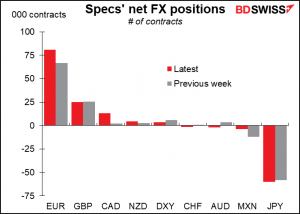 After several weeks of trimming USD shorts, specs then turned neutral a week or two ago. The pause did not turn out to be a turning point though. On the contrary, specs once again went short USD with a vengeance in the latest week, albeit concentrated almost entirely in two currencies: EUR and CAD (with some NZD & MXN). On the other hand, they increased short JPY positions and flipped to small short, from small long AUD and CHF. They also added to their already-historically-long GBP positions.

The notable point about the increase in JPY shorts was that it occurred even as USD/JPY fell (i.e., JPY strengthened). Specs were selling JPY into strength. There’s a nice alliterative phrase “long and wrong” but no equivalent that I know of for being on the wrong side of a short. “Short and snort”? “Short and abort”? “Short and child support”? In any case, this may explain the continued fall in USD/JPY during the rest of the week as specs probably closed out some of these losing positions. 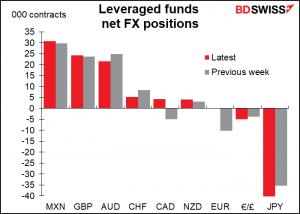 Hedge funds flipped to long CAD from short. They also added to their short JPY positions. But they closed out their EUR shorts and went a tiny bit long (so small as to not be visible in the graph). They also reduced their AUD and CHF longs – notable as AUD is a “risk-on” currency and CHF a “risk-off,” so why the same movement in both? 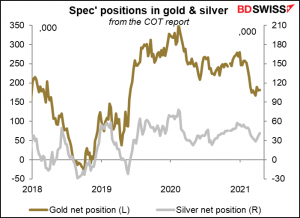 Speculators added modestly to their long gold and silver positions. 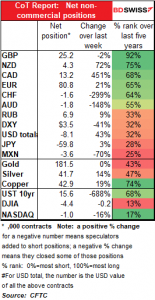 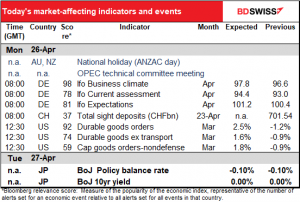 The week starts off with the Ifo indices. They’re all expected to be higher. 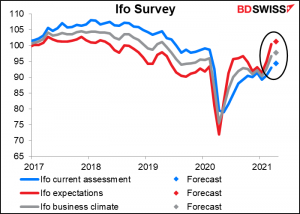 The Ifo business climate index hasn’t kept pace with the German composite purchasing managers’ index (PMI), which is back above the 50 line signalling expansion. 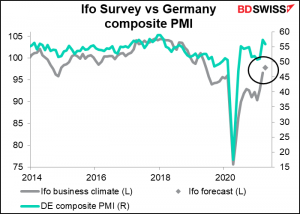 Swiss sight deposits…sigh…no longer very interesting. I’ll keep posting this graph every week, but as long as EUR/CHF is going in the right direction (up, which is down in this graph since the Y-axis is inverted) the Swiss National Bank doesn’t need to intervene much. Last week it looks as if they intervened a bit – sight deposits rose CHF 204mn, the first rise in a month and only the sixth so far this year out of 15 weeks. Last year, the average change in weeks when sight deposits rose was CHF 3.06bn. So they seem to be pretty much staying out of the market so long as EUR/CHF is behaving itself. 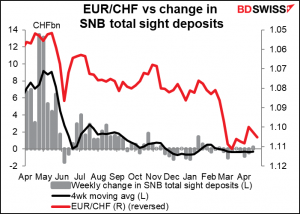 Sometime during the European day, there’s supposed to be an OPEC technical committee meeting, where market fundamentals and compliance with the production cuts are discussed. This meeting would then make a recommendation for the full meeting on Wednesday. It looks like they will just confirm the existing plans, which should mean no effect on the markets. But you never know for sure.

Then we just wait for the US to open up and treat us to a new edition of the durable goods figures. It’s expected to be up a dramatic 2.5% mom. Part of that will be an increase in airplane orders at Boeing, part a recovery in auto production, which plunged nearly 9% the previous month due to supply shortages and weather problems. 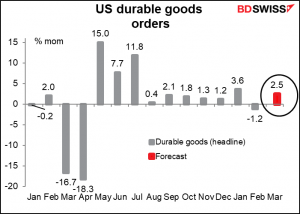 But even excluding transportation, orders are expected to be up a healthy amount. 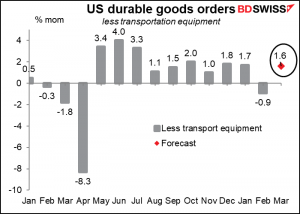 Nondefense capital goods orders excluding aircraft, a key indicator of equipment spending in the GDP accounts, are through the roof – well above their pre-pandemic level. 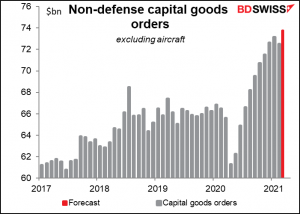 All told the figures should reinforce the idea of the US economy on the rebound, which should be good for stocks and therefore negative for USD.

After that we can take it easy, go for a walk, watch your charts and wait for the Bank of Japan (BoJ) Policy Board meeting overnight. As I said so succinctly in my Weekly Economic Outlook:

There’s virtually no chance of any such change from the Bank of Japan at its meeting Tuesday. Contrary to the change we saw from the Bank of Canada last week, the BoJ reportedly will cut its forecast for inflation for this fiscal year (April 2021 to March 2022), thanks to reductions in cellphone charges. The BoJ currently expects core CPI to rise by a mere 0.5% in the current FY. The forecasts will be in the BoJ’s quarterly Outlook Report, which will have forecasts for FY23 for the first time. The FY23 inflation forecast will reportedly be around 1%, still far below the Bank’s 2% target. With little room to loosen policy further and no intention of tightening again during the Anthropocene Era, the Policy Board is likely to come to yet another insignificant conclusion, causing few ripples in the FX market.

As you can see, the trading range in both USD/JPY and EUR/JPY recently has tended to be narrower on BoJ days than normal. 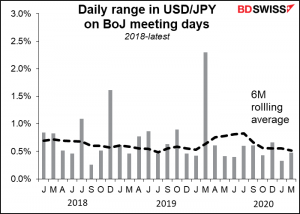 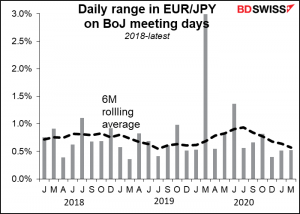 The meeting will be the first for new Policy Board member Asahi Noguchi. The former economics professor is a known dove who’s in favour of an easy monetary policy, but he’s already signalled that he won’t push for further easing measures (yet). He replaces centrist Makoto Sakurai, who never cast a dissenting vote. This brings the tally on the Policy Board to four reflationists out of the nine members, so they are getting close to a majority in favour of perhaps more aggressive moves. 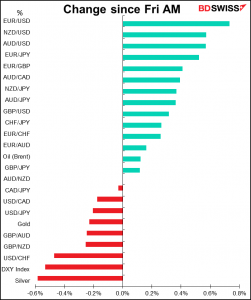 Nvidia Preparing to Walk Away from Arm Acquisition Bloomberg News