The U.S. economy’s comeback is firing on all cylinders with employment, retail spending and manufacturing exhibiting strong gains. Thursday’s barrage of economic data showed that some parts of the economy, like retail sales, have returned to or exceeded pre-pandemic levels. Applications for unemployment benefits, while still elevated, hit the lowest in 13 months. The rebound in demand reflected a wave of business reopenings last month, increased vaccination rates and a fresh round of stimulus checks to households. In addition, the bounce back follows a harsh winter and surge in Covid-19 cases in many parts of the U.S. that curbed activity. 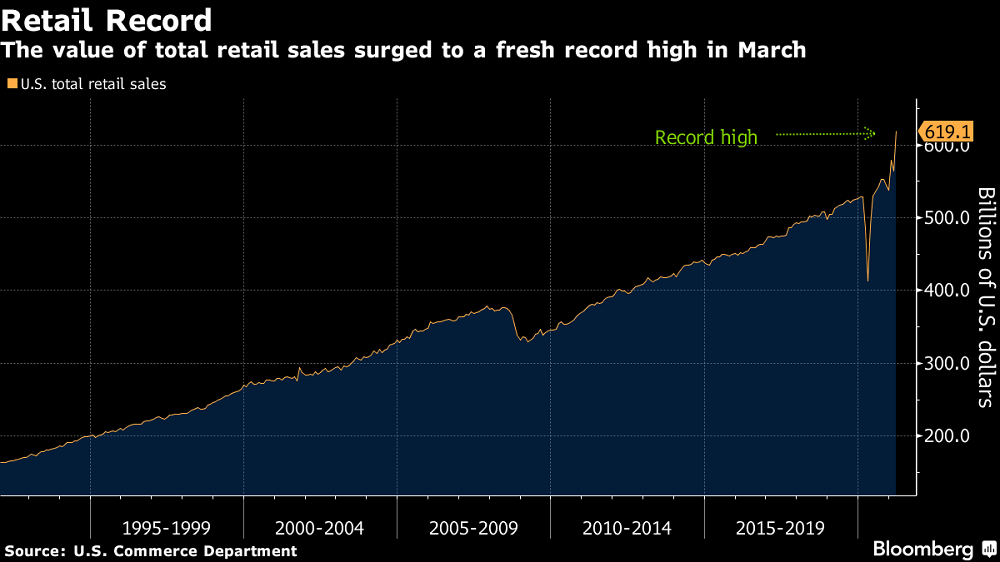 The 9.8% increase in March retail sales was the second-largest in government data back to 1992. A separate report showed initial state jobless claims fell by almost 200,000 last week, partly reflecting a significant drop in California. Other reports Thursday showed manufacturing is powering ahead too. A Federal Reserve Bank of New York index of factory activity in the state jumped to the highest level since 2017. A Philadelphia Fed manufacturing gauge improved to the strongest reading since 1973. Additionally, production at U.S. factories increased in March by the most in eight months following the weather-related setback in February and an April measure of homebuilder sentiment improved.

U.S. stocks rose to record highs and Treasury yields fell as investors cheered the data and earnings reports. While the economy has shown signs of roaring back, Fed officials have cautioned in recent days that the U.S. has a long road to recovery — with many Americans still out of work and the virus still percolating. Initial jobless claims are more than double pre-pandemic levels and there are an estimated 8 million fewer jobs than in February 2020. The recovery has also been uneven, with the service industry hit the hardest, leaving many lower-income and minority Americans out of work. While federal stimulus payments provided a temporary spending boost in the month, their impact in the longer term remains to be seen. Reports in the coming months will show whether job growth and overall consumer confidence will be enough to allow for such huge monthly sales gains. Further, as the economy continues to reopen, consumers may steer their spending away from merchandise and more toward travel and other services, which could lead to more moderate retail sales.