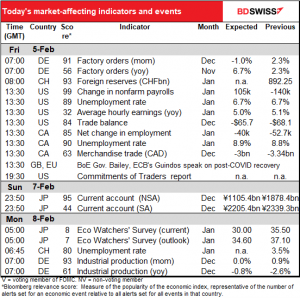 It’s said that “he who lives by the crystal ball has to learn to eat glass.” I’m having a glass sandwich for breakfast this morning as I was totally wrong about the Bank of England Monetary Policy Committee decision yesterday. Well, not totally wrong. They did downgrade their short-term forecasts and upgrade their longer-term forecasts. However, that did not result in a more dovish statement. On the contrary, their tone was significantly more optimistic than it was before and their forward guidance was unchanged.

On top of which, although they asked banks to be able to implement negative rates in six months, their forecasts implied that the economy would be well on the way to recovery by then and it would be unnecessary to do so. As a result the money markets are no longer discounting negative rates in Britain.

The repricing pushed up GBP against all currencies. 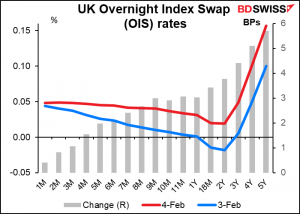 Elsewhere, we once again saw USD gaining on a “risk-on” day when the S&P 500, NASDAQ and Russell 2000 all renewed their record highs. This despite the fact that Kansas City Fed President George said the Fed was still “far away” from achieving its goals and it was “too soon to try to speculate” about taering down its bond purchases. “Until we see the path to getting past this virus, it will be difficult to make any prognosis about when that time might come.” George doesn’t vote on the rate-setting Federal Open Market Committee (FOMC) this year, but she’s well known as among the most hawkish people on the Committee. So if even she thinks it’s “too soon to begin thinking about thinking about” tapering, then certainly that’s the consensus view among the members.

The Fed’s continued dovishness contrasts with several other central banks (such as the Bank of England and Bank of Canada, for example), which are upgrading their forecasts and turning more hawkish, or at least less dovish. It puzzles me then why the dollar is so strong. It’s not because the US economy is surprising on the upside. 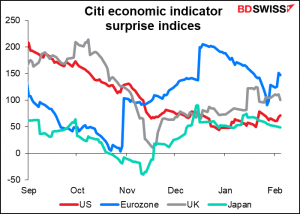 Admittedly, not every central bank is getting more confident. The European Central Bank for example seems to be ever more worried about the future. That may be because while the US and Britain seem to be making headway against the virus, the EU has stalled, and the vaccine roll-out there has run into problems. Since the virus is the main factor running across all economies nowadays, progress in containing it may be one of the main factors determining currency values. 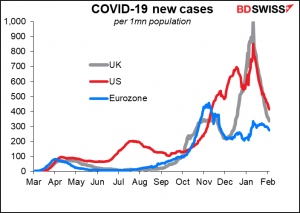 But of course if that were the case, then Australia – which is averaging six new cases a day for a population of 25mn people – would have the strongest currency in the world (along with New Zealand, with two new cases a day). And that just isn’t so.

One reason may be the hope of fresh fiscal stimulus in the US. The US Senate last night started voting on the budget resolution for the 2021 fiscal year, following the House passing its version Wednesday. This would allow President Biden’s fiscal relief package to pass on a simple party-line vote. The Senate rejected the proposed hike in the minimum wage to $15/hour, but they may be able to sneak that in again later.

It’s US nonfarm payrolls day today! After falling in December – the first decline since the huge drop in April – nonfarm payrolls (NFP) are expected to be up this month. Last Friday expectations were for a small rise of 50k, but economists have upgraded their forecast after Automated Data Processing (ADP) came out with a much bigger-than-expected 174k increase (vs 70k expected). 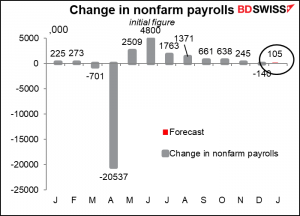 A rise of 105k would still be the smallest rise since the pandemic started, but at least it would be a rise, as opposed to December’s fall.

I was surprised that the ADP report beat expectations so much because initial jobless claims have been rising — they were 13% higher during the January survey week than the December survey week. However, it may be more significant that the Institute of Supply Management (ISM) manufacturing and service-sector purchasing managers’ indices (PMIs) for employment are both in expansionary territory (52.6 and a strong 55.2, respectively) for the month. The service-sector index is particularly important as that’s where most of the people in the US are employed and also where most of the job losses have been since the pandemic began. 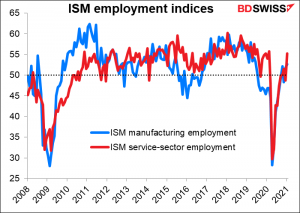 My rough estimate for the NFP, based on the past relationship between the NFP, the ISM employment indices, the ADP report and jobless claims, is for 121k. 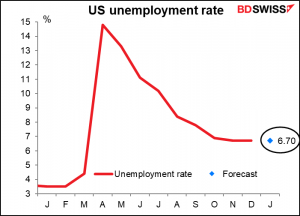 What impact is this likely to have on the currency? Recently, the dollar hasn’t been particularly volatile on NFP days regardless of whether the figure beat or missed expectations. 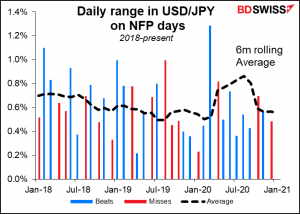 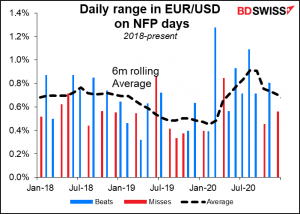 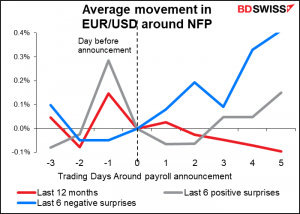 You can see that a positive surprise hasn’t always helped the dollar to rally vs EUR, especially last October (purple line). 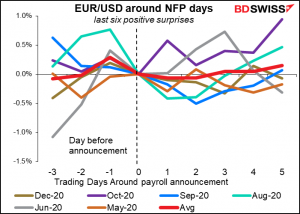 On the other hand the dollar has generally weakened on a negative surprise, although November was an exception (gold line). 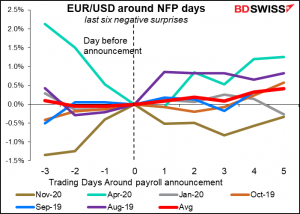 Canada on the other hand is expected to see a small fall in employment and a rise in the unemployment rate. The different trend from the US could prompt some profit-taking in USD/CAD, especially as CAD has held up best vs USD this week out of all the major currencies. 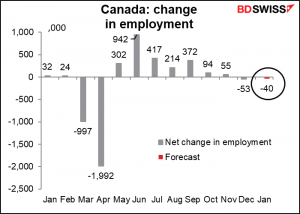 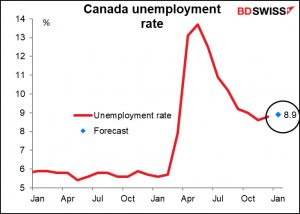 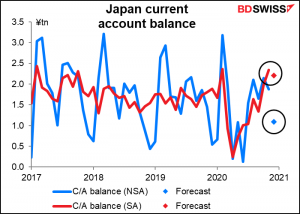 Then comes German industrial production, which is expected to be unchanged from the previous month. 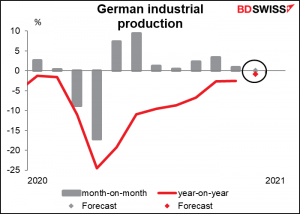 This would leave Germany’s industrial production in line with the US, so not bad (although Germany has been lagging behind the Eurozone overall). 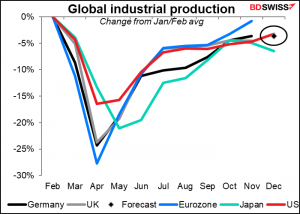 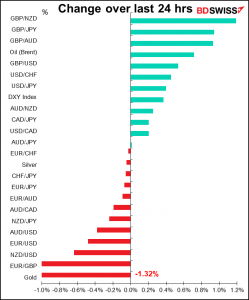 Bitcoin climbs past 19,000 and closes in on record price

Foreign Tourists in Spain Fell to 51Year Low in 2020

BTC Rises 5 after US Congress Passes 900B ad for Bitcoin